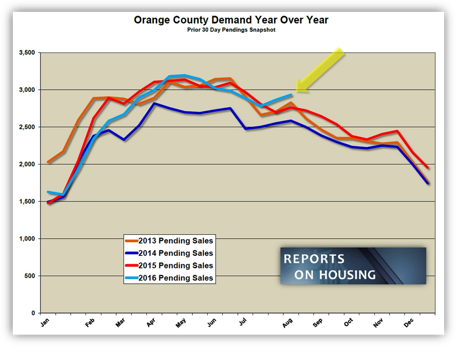 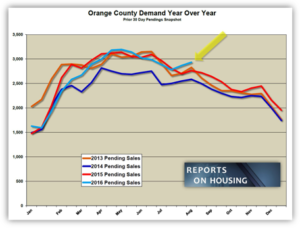 As expected, the Orange County housing market slowed in July a bit, transitioning from the red hot Spring Market to the beginning of the Summer Market. It was as if housing downshifted a gear, from 5th to 4th; it was still cruising, just not as fast as the spring. August typically looks a lot like July, maybe increasing a smidgen, but still slower than the peak of the real estate market, March through mid-June. This cyclical phenomenon is easily explained by logically looking at the timing of the year. There are plenty of summertime distractions, especially in Southern California, from splashing around in the waves to traveling on the annual family vacation. The distractions lead to less buyer activity and demand drops. That’s the typical, annual real estate cycle in Orange County. Spring is the busiest time of the year. Summer is the second busiest. Then, there is the Fall and Winter Markets, where demand continues to downshift until it drops to its lowest level of the year by the end of December.

This year has been quite a bit different as demand increased by 5% in the past month. It feels like June, the tail end of the Spring Market, and not at all a typical summer. Demand, the number of new pending sales over the prior month, increased from 2,783 to 2,935 in the past month. Compare that to last year at this time when demand decreased by 2% from 2,810 to 2,762 (6% less than today’s level). Demand has not been this high since 2012 when it reached 3,544 pending sales; however, 17% were short sales that took a very long time to sell and often never closed. Today, only 1.2% of demand are short sales. Stripping short sales from demand, the last time it was this high dates all the way back to 2005, prior to the great recession.

Many may wonder why housing is so hot this summer. It took the market a while to get to this point. Housing has healed. Foreclosures and short sales are scary stories from the past, currently representing less than 3% of all closed sales. In 2012, they represented 31%. Now that housing has been restored and distressed properties are only an asterisk, the market has been blossoming. Throw in rock bottom interest rates, even lower than last year, and you have a recipe for strong demand. And, it does not look like interest rates are going anywhere fast. The Federal Reserve raised the short term rate for the first time in nine years back in December of last year. They hinted at four more hikes in 2016. So far, NOTHING. It doesn’t appear that there will be a change until December, if at all.

Low interest rates are only part of the reason for hot demand. This year, like every year since 2008, fewer homeowners are opting to sell. There are 30% fewer homes on the market compared to 2000 through 2007. People are staying in their homes a lot longer and are just not moving. On average, the current turnover rate for homeowners is 23 years. That’s a far cry from the days of lore, prior to the Great Recession, when homeowners moved much more frequently.

With a low supply of homes and strong demand, it’s no wonder that there’s a heat wave in housing.